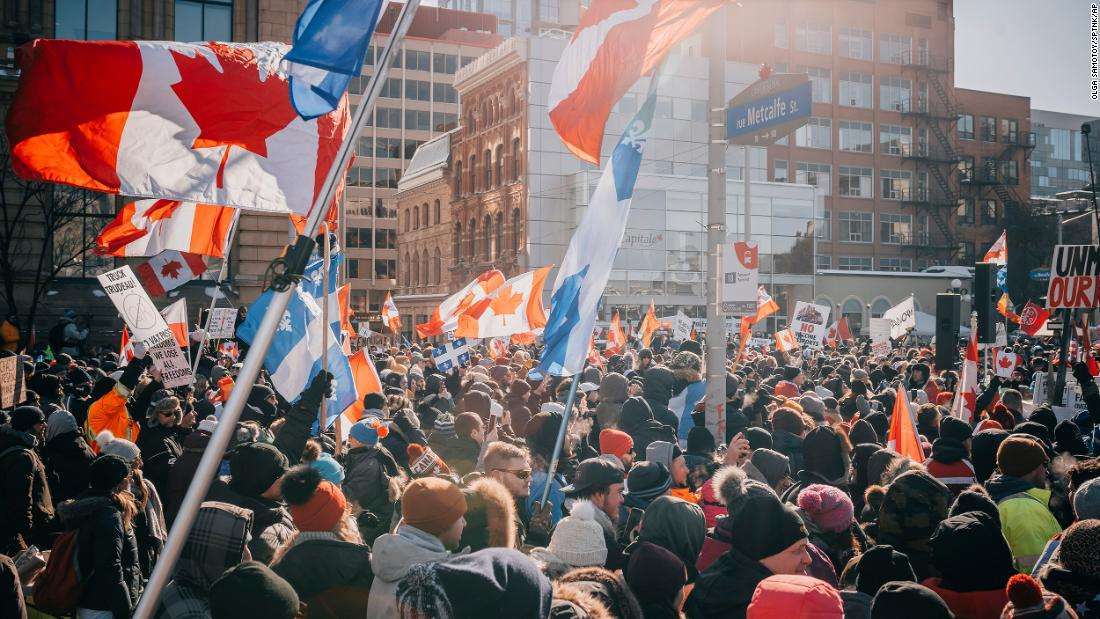 We’ll debunk some of that misinformation below. First, here’s some quick background:

The protests involve a minority of Canada’s truck drivers, some far-right activists and a variety of other citizens. The demonstrations began in late January as a “Freedom Convoy” of trucks and other vehicles. The convoy then turned into an ongoing demonstration in the Canadian capital of Ottawa, whose mayor declared a state of emergency on Sunday. It has also sparked protests elsewhere and inspired plans for a similar convoy in the US.The protests have been touted on right-wing US television station Fox and have been cheered by some prominent Republican officeholders and conservative pundits; organizers have raised millions of dollars. Former President Donald Trump even weighed in with a statement praising the protesters and denouncing Trudeau. The convoy started after Canada began requiring truckers who cross the US border to be fully vaccinated against Covid-19 or have two-week quarantines upon returning home. The Canadian Trucking Alliance, the primary advocacy group for Canadian truckers, has opposed the protests and has said that more than 85% of Canadian truckers who regularly cross the border were fully vaccinated as of late January.

False claims about the number of trucks

Organizers claimed in late January that the convoy had grown to tens of thousands of trucks — even that the number was around 50,000. Others repeated this “50,000” figure. Theo Fleury, a retired hockey star who’s a frequent critic of Trudeau, said on Fox in late January that there were “50,000 truckers” heading to Ottawa. Rogan, who has been criticized for his show’s role in promoting Covid-19 misinformation, said on the show in late January that the convoy involved “apparently some insane amount of people, like 50,000 trucks.” Even larger figures, like “80,000” or “over 130,000” trucks, swirled on social media.Facts First: The number of trucks involved in the protest was never anywhere close to 50,000; such a number of trucks would have taken up hundreds of miles more road space than this protest occupied. Canadian journalists put the number of trucks in the hundreds in late January. Ottawa Police Chief Peter Sloly told reporters on January 31 that it was impossible to provide exact crowd-size figures but that he had “heard” numbers as high as 18,000 total demonstrators — not just truckers — present in the city at the peak of the protest on January 29. No credible source has reported that the number of participating trucks in particular ever approached tens of thousands, let alone “50,000.”Police in Kingston, Ontario, a city through which a portion of the protest convoy passed, tweeted on January 28 that they had counted 17 full tractor-trailers, 104 tractors without trailers, 424 passenger vehicles and 6 RVs. The same day, Global News chief political correspondent David Akin tweeted that police sources had told him there were “230 tractors / tractor-trailers & 725 personal vehicles from Toronto and Western Canada,” plus 200 vehicles from the eastern provinces of New Brunswick and Nova Scotia (he added that there were an “unknown” number of others involved).

Rogan could not be immediately reached for comment. When Fleury was asked for comment about how he had repeated the false “50,000 truckers” claim on Fox, he emailed a reply in which he attacked CNN and the Trudeau government and said, “Ever heard of a little thing called marketing??? It worked.”

Numerous social media posts put inaccurate captions on photos and videos of events that had occurred prior to 2022 — such as truck demonstrations, other protests, even a parade in support of the Special Olympics — to falsely claim these images were connected to the Canadian convoy protest.

Facts First: One video that has been shared on various social media platforms was captioned to claim that it showed South Carolina truckers heading to Ottawa to join the convoy — but it actually showed an August 2021 truck parade in support of the Special Olympics, USA Today reported. A video of honking Brazilian truckers that circulated on Facebook was from a May 2021 demonstration in support of President Jair Bolsonaro, not a demonstration in solidarity with the Canadian truckers as some captions claimed, USA Today also reported. A photo of a massive protest crowd, shared in Twitter posts in both English and Spanish as if it were from Ottawa this year, actually depicted a 1991 demonstration in Moscow against the Communist government of the Soviet Union, Reuters reported. And another photo, which has been described in Facebook posts as a group of Amish people driving to support the convoy, is a shot of Old Order Mennonites simply going to church, PolitiFact reported.

Even billionaire Tesla Chief Executive Officer Elon Musk got in on the game, though without making an explicitly false claim himself.

Musk, who has more than 73 million followers on Twitter and has expressed support for the Canadian protest, tweeted out an aerial image on January 30 that showed a long line of trucks on a road surrounded by snowy land. The image included the words, “Taking a break from politics for a while. Here’s a nice photo of trucks.”

Musk didn’t say anything about where and when the image had been taken, but the replies to his tweet — which generated more than 40,000 retweets — showed that a significant number of people believed that it was a shot of the Canadian convoy this year, as some others on social media strongly suggested in their own captions.

A false claim about police resignations

Pat King, who was listed as one of the regional organizers of the convoy and has been one of its leading online promoters, has more than 293,000 followers on his Facebook page. During a Facebook livestream on Sunday, which had been viewed more than 204,000 times as of early Tuesday afternoon, King claimed that “50% of the Ottawa police force have all turned in their resignation today” — suggesting these supposed resignations had happened because the officers support the protests. That claim quickly made its way to other social media platforms. British actor John Bowe tweeted on Monday: “Reports that 50% of @OttawaPolice have tendered their resignation and Canadian Armed forces reportedly vow allegiance to the people.” Bowe’s tweet generated more than 11,000 retweets before he deleted it.

Facts First: These claims were entirely false. Ottawa police spokesperson Constable Amy Gagnon said in Monday emails to CNN that “there have been no resignations in relation to the Demonstration” and “all available officers are working.” And the Canadian Armed Forces have not made any vow of “allegiance” in relation to the protests nor issued any dramatic statements of any kind about this issue. “In short, no, we have not made any such comment,” a military spokesperson said in a Monday email to CNN.

King, who has a history of promoting conspiracy theories and other false claims, did not respond to CNN’s requests for comment on Monday. After CNN fact-checked Bowe’s tweet on Twitter on Monday, Bowe tweeted to another Twitter user that “I wish it were (true) but it is disputed. Apparently the reports I read were posted by an imaginative trucker. But we can dream.”

A false claim about the government and hotels

Rupa Subramanya, who has more than 128,000 Twitter followers and writes columns for the National Post, a conservative Canadian newspaper, tweeted on Sunday: “I’ve heard from so many today that some Ottawa hotels have been instructed by the city/feds not to give out rooms to the protestors. The Marriott downtown apparently is empty but evidently all the rooms booked. Someone should really investigate if this is true.”

Facts First: Regardless of what Subramanya may have been told, the claims she amplified were not true. The employees who took CNN’s calls at the downtown Marriott and five other Ottawa hotels on Monday said their establishments had not been given any anti-protester instruction by any government; Patrick Champagne, press secretary to Ottawa Mayor Jim Watson, told CNN that the claim “is categorically false”; Alexander Cohen, spokesperson for Canadian Public Safety Minister Marco Mendicino, called the claim “ludicrous” and said that “no one from the federal government has done that”; Steve Bell, president of the Ottawa Gatineau Hotel Association, said that “to my knowledge there is no truth to this rumour.” As for the Marriott in particular, it had rooms available at the time of Subramanya’s tweet on Sunday evening and again on Monday evening.

When CNN told Subramanya that the claims in her tweet seemed to be false, she said she was glad we had looked into the matter. She insisted she had herself made “no claim” and had merely issued a “call for help” for journalists to look into what she had been hearing from protesters, since “frankly I’ve been working round the clock talking to people on the ground and so I haven’t had the time or the opportunity to vet this claim.”

The “mainstream Canadian media should be fact checking these and debunking them if they’re false,” Subramanya said, though she herself writes for a national Canadian newspaper.