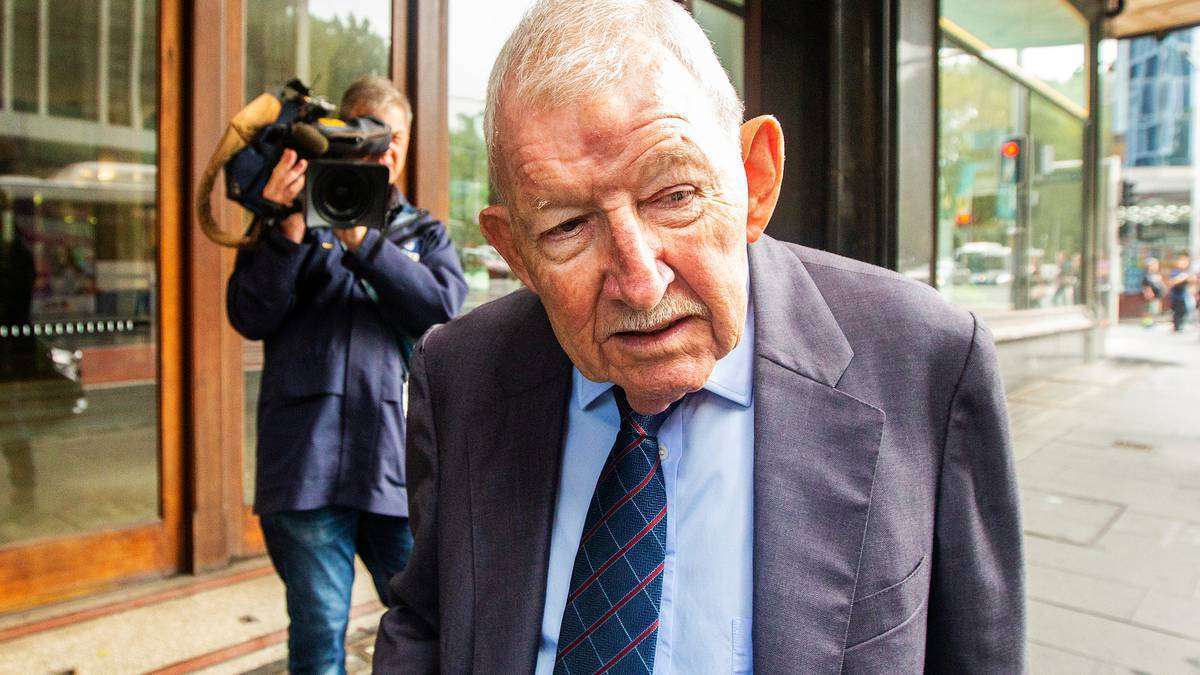 Ron Brierley said nothing outside court before he was sentenced to 14 months in jail for possession of child pornography. Video / ABC Australia

Disgraced New Zealand businessman Ron Brierley can be released from prison later this month after his lawyers argued the former rich-lister’s health was rapidly deteriorating behind bars.

Today, the 84-year-old’s legal team told the NSW Court of Criminal Appeal at the state’s Supreme Court in Sydney their client should be permitted to serve the remainder of his sentence for possessing child abuse material at home.

Brierley’s lawyer Tim Game SC told the court the octogenarian, who could not attend the hearing today due to Covid-19 restrictions, had undergone several medical procedures since being incarcerated and his health has quickly declined.

Brierley has had treatment for skin cancer, which a dermatologist advised required three weeks of hospital care, but he was returned to his prison cell the same day and suffered complications when his stitches broke, Game said.

Brierley, who walks with the aid of a cane, was sentenced to 14 months’ imprisonment in October after admitting he possessed tens of thousands of child sex abuse images.

Brierley, who voluntarily surrendered his knighthood for services to business after Prime Minister Jacinda Ardern said the process to strip him of the honour had begun, sought to serve his sentence in the community on a release order.

Prosecutors, however, argued prison was necessary at his sentencing.

The court today decided to quash Brierley’s original sentence and impose a new 10-month sentence expiring on August 13. It also ordered Brierley to be eligible for release from prison on February 13, once he had served four months of his sentence.

Under his original sentence, Brierley would’ve been eligible for parole in May.

The court said its reasons for today’s decision would be released at a later date.

Brierley’s downfall began following an anonymous phone call, which sparked a five-month police investigation. He was arrested by Australian Border Force officers as he was about to board a flight to Fiji in December 2019.

Police said they found more than 200,000 images and 500 videos on Brierley’s laptop and electronic storage devices depicting child abuse material. In total, he was charged over 46,795 images found.

The charges Brierley pleaded guilty to were for material on his devices, seized when Brierley was stopped at Sydney Kingsford Smith Airport, and also during a search of his Pt Piper waterfront mansion in Sydney’s east.

The Wellington-born Brierley told police he thought the images were “perfectly okay” and had been “approved by various bodies”.

Known to some as “Lionheart”, Brierley’s corporate raiding feats began in New Zealand in the 1960s as he identified asset-rich companies which offered low returns to shareholders and turned stagnant wealth into returns.

His money and power grew through the 1980s — his net worth peaking at more than $200 million — with one in every 20 Kiwis once owning shares in his company RA Brierley Investments Ltd (BIL).

In 1988, while chairman of the Bank of New Zealand, his contribution to business and philanthropy led to a knighthood.

He retired as a director from BIL in 2001 and later from the chairman’s role at Guinness Peat Group in 2010, before also leaving as a director in 2015. In June 2019, Brierley retired as chairman of the Sydney investment firm Mercantile Investments.

Much of Brierley’s later life was spent on his hobbies of cricket and stamps, rumoured to have been one of the largest collections in the world.

Brierley’s links to cricket included a life membership with Cricket Wellington and a pavilion at the Basin Reserve named after him. He was also a former trustee of the Sydney Cricket Ground.

Signs bearing his name have now been scrubbed clean.

Wellington College also severed ties with its tainted old boy, who had donated significant amounts of money to the school, where a theatre and sports field had been named after Brierley.