Additional help from Newfoundland and Labrador was on the way Tuesday to help crews in southwest Nova Scotia battle an out-of-control wildfire that a provincial official said may have been started by human activity.

Two helicopters were dropping water on the flames, and a CL-415 water bomber was en route to Nova Scotia to help with the efforts.

The Department of Natural Resources said in an email Tuesday evening that the fire, near South Horseshoe Lake in eastern Yarmouth County, was estimated to have grown to about 350 hectares and continued to spread.

An estimate earlier in the day had put the fire, which began Monday afternoon, at about 25 hectares.

Kara McCurdy, wildfire prevention officer for the department, said no homes or businesses were in danger.

Because the area is so remote, DNR brought in a helicopter from Shubenacadie in central Nova Scotia to drop water on the flames. 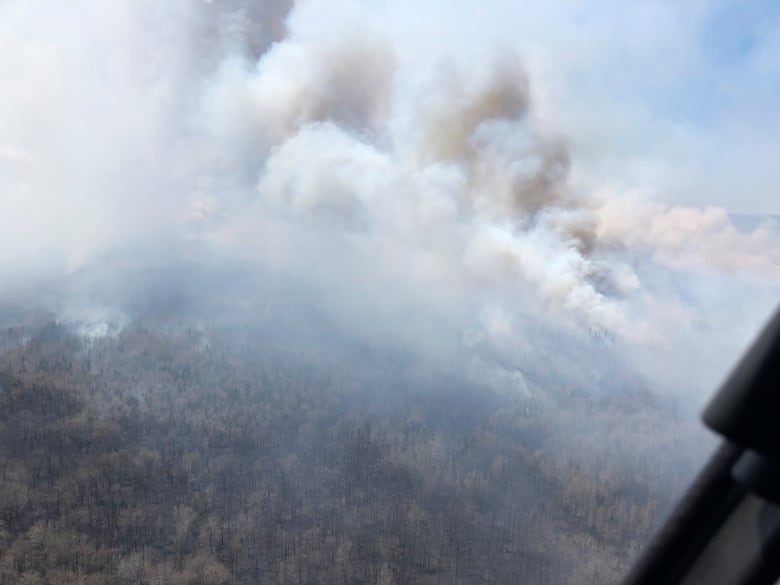 “We’re concerned with the low humidity and high winds that it will pick up, so we sent an additional helicopter,” she said.

There were two DNR crews from Shelburne and Yarmouth assisting, including 12 personnel and two pilots.

“Fire crews are currently on the flanks and the base of the fire, working their way around,” said McCurdy. “A fire that size is kilometres long so it’s going to take them a while to get any access.”

Here’s a look at the latest visible satellite loop where you can clearly see the Horseshoe Lake wildfire underway.
Note the winds pushing the smoke westward into Yarmouth county.
An special air quality statement is in effect. https://t.co/ODHaXIQRr0#nswx pic.twitter.com/ECt4tM46aO

CBC meteorologist Ryan Snoddon said lighter winds and higher humidity levels were on the way for Wednesday, with a chance of some light showers and drizzle.

“Unfortunately, there’s no substantial precipitation in the forecast until at least Sunday.”

Despite light showers in the short-term forecast, McCurdy said DNR was “not optimistic.”

“We’re preparing for tomorrow like we did today,” she said.” We have aircraft on alert, both in western and in central … because we’re looking at dry conditions right through to the weekend.” 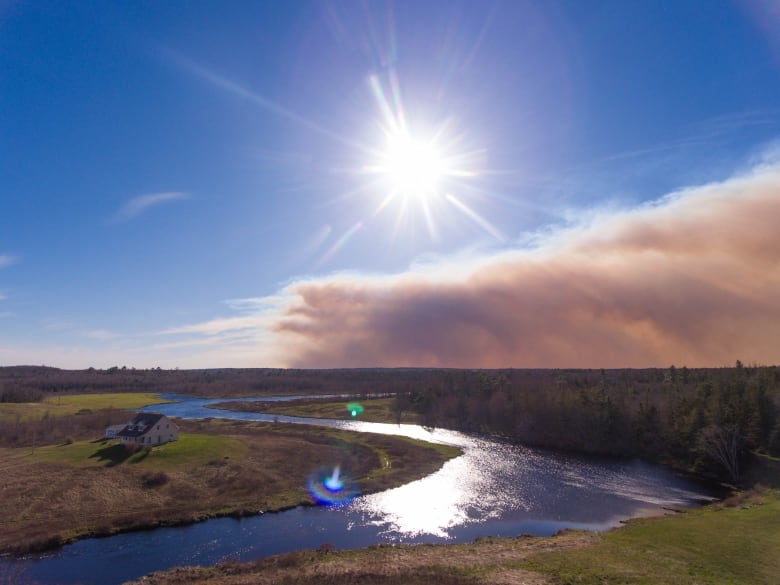 The fire was burning in a remote area in Yarmouth County full of softwood trees and bog conditions. (Tim Doucette/Facebook)

McCurdy said she suspects the fire is the result of human activity because there hasn’t been any recent lightning.

“We just ask that residents really follow the burn restrictions that are posted daily and not burn in the morning,” she said.

“Make sure that you’re checking in every day at 2 o’clock to see if you’re allowed to burn. Even if you are allowed to burn and it’s windy, be mindful of where you have your brush pile or campfire … because it’s super dry right now.” 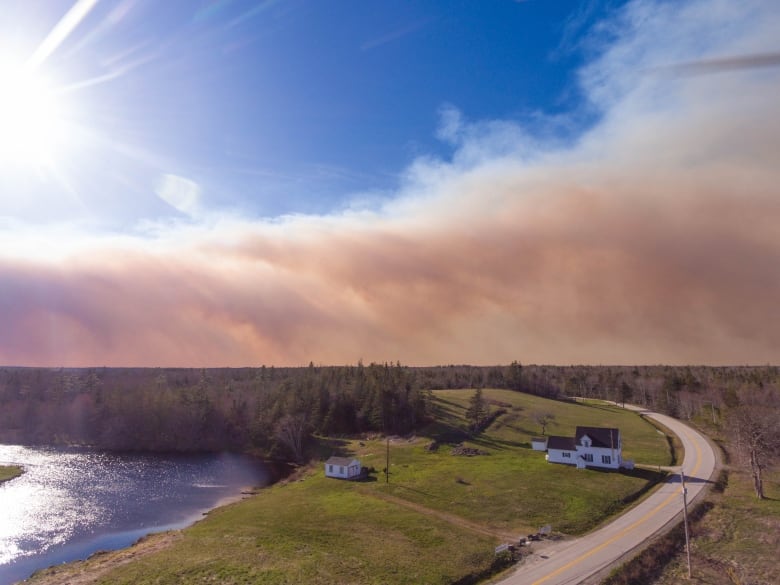 Environment Canada issued a warning about elevated pollution levels for those downwind from the fire. (Tim Doucette/Facebook)

Aaron Pottier, fire chief for the Quinan fire department, said Tuesday because the fire is in a fairly remote area, his department had not yet been called upon to help battle the blaze.

Pottier said there was quite a lot of smoke in the air in his community, which is located about 20 kilometres south of the fire.

“It was thick, at times, depending where the wind was blowing, and at times it settles a little bit toward the ground a little bit more. So, yesterday afternoon around suppertime there was a fair bit of smoke close to the ground in and around the community,” he said.

“The more the wind blows, the higher up it seems to go. This morning, again it comes and goes. There’s a bit of a smoke haze around, but it comes and goes and there’s definitely a smell of smoke in the air.” 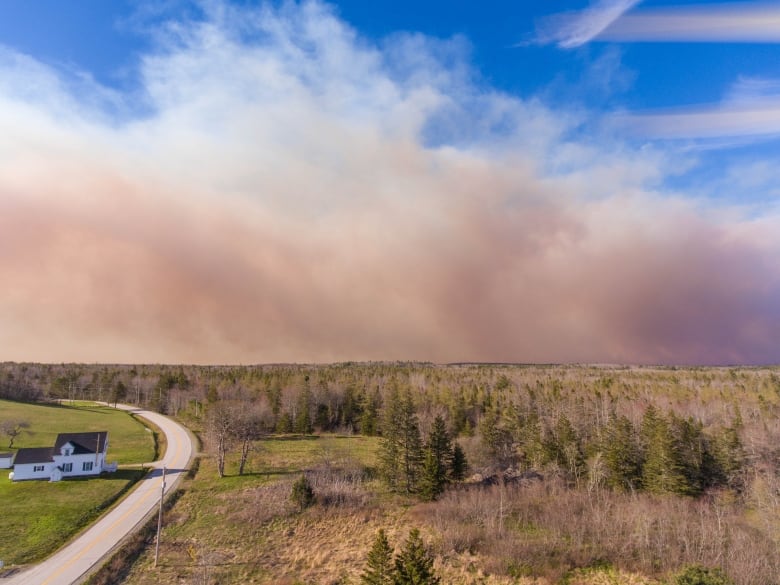 DNR said Tuesday the fire was in a fairly remote area and there was no immediate risk to homes or businesses. (Tim Doucette/Facebook)

Environment Canada issued a warning about elevated pollution levels. According to the national weather service, satellite imagery Monday evening showed the fire was located about 40 kilometres northeast of the town of Yarmouth.

The smoke plume was staying north of Yarmouth, but Environment Canada said it could also affect air quality near Beaver River and Port Maitland.

“Individuals may experience symptoms such as increased coughing, throat irritation, headaches or shortness of breath. Children, seniors and those with cardiovascular or lung disease, such as asthma, are especially at risk,” said Environment Canada’s statement.