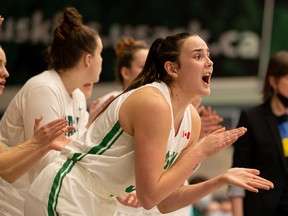 The U of S Huskies women’s basketball team not only went 2-0 on the weekend, but the squad raised the banner in celebration of its 2021-22 Canada West championship season.

University of Saskatchewan Huskies cheer on their teammates as they take on the University of Lethbridge Pronghorns during the Canada West conference semi final at the PAC. Photo taken in Saskatoon, Sask. on Friday, March 18, 2022. Photo by Michelle Berg /Saskatoon StarPhoenix

The University of Saskatchewan men’s and women’s basketball teams saw their first official Canada West action of the 2022-23 season over the weekend, with both teams hosting the Mount Royal University Cougars.

In their opener on Friday, the Huskie women outscored Mount Royal 25-7 in the first quarter on their way to an 86-55 victory. Saskatchewan’s Carly Ahlstrom led both teams with 17 points.

We deliver the local news you need in these turbulent times on weekdays at 3 p.m.

Thanks for signing up!

A welcome email is on its way. If you don’t see it, please check your junk folder.

The next issue of Saskatoon StarPhoenix Afternoon Headlines will soon be in your inbox.

We encountered an issue signing you up. Please try again

Saturday night’s game was for celebrating. Not only did the current team post another convincing victory over the Cougars, winning 83-55, but the 2021-22 team was also honoured with the raising of their Canada West championship banner.

Ahlstrom once again led both teams in scoring, this time with 25 points.

On the men’s side, Saskatchewan came away with a win in their first game of the season as well, turning a 61-37 halftime lead into a 99-77 victory as Alexander Dewar led the Huskies with 24.

The following night, the Huskies were on the opposite side of the victory as the Cougars outscored the home team 54-35 in the second half to win 94-75.

Dewar had a team-high 32 points in the game.

What was supposed to be a home-and-home series for the Huskies women’s hockey team (5-3-2-0-2-0) and their University of Regina Cougars counterparts turned into a two-game away series for Saskatchewan thanks to a water main break at Merlis Belsher Place.

Not to be deterred, the Huskies posted a pair of victories against their provincial rivals, winning 4-1 on Friday and 2-1 on Saturday.

In Friday’s clash, Saskatchewan picked up three power-play goals, one each from Taylor Wilkinson, Kara Kondrat and Sara Kendall, while Kennedy Brown added a single with both teams at full strength.

Goals were more sparse on Saturday night, but Huskies Kendra Zuchotzki and Mallory Dryer scored in the first and second periods, respectively, while Regina’s Hannah Pennell scored the lone goal for her team.

The men’s hockey Dogs (7-1-1-0-1-0) also posted a victory against Regina, winning their only game of the weekend 5-1 over the host team on Friday.

Regina’s Riley Krane scored first at 4:45 into the opening period on a power-play, but it was all Saskatchewan after that. Jaxan Kaluski picked up a pair of goals and Cael Zimmerman, Dawson Holt and Mark Rumsey each scored once.

Saskatchewan’s volleyball teams were on the road this weekend, taking on the University of Fraser Valley Cascades.

The Saskatoon Blades (12-4-0-0) couldn’t overcome an early two-goal deficit on Friday, dropping a 5-3 decision to the Everett Silvertips in Western Hockey League action at SaskTel Centre.

Austin Roest and Ty Gibson put the Silvertips up 2-0 on their way to the victory.

Saskatoon rebounded on the road on Saturday, knocking off the host Brandon Wheat Kings 4-1.

On Saturday, it was the Blades jumping to a first-period lead thanks to a power-play goal from captain Aidan De La Gorgendiere at 16:52. The lead was short lived, as less than three minutes later Brandon’s Andrei Mayavin tied things at 1-1.

All the scoring in the final two periods belonged to the Blades, however, as Jordan Keller scored twice and Brandon Lisowsky added a single to lead the Blades.

The Blades hit the ice again on Nov. 12, when they begin a five-game home stretch starting with a clash against the Edmonton Oil Kings.

The news seems to be flying at us faster all the time. From COVID-19 updates to politics and crime and everything in between, it can be hard to keep up. With that in mind, the Saskatoon StarPhoenix has created an Afternoon Headlines newsletter that can be delivered daily to your inbox to help make sure you are up to date with the most vital news of the day. Click here to subscribe.