Curtis Matwishyn was hoping to snap a few... 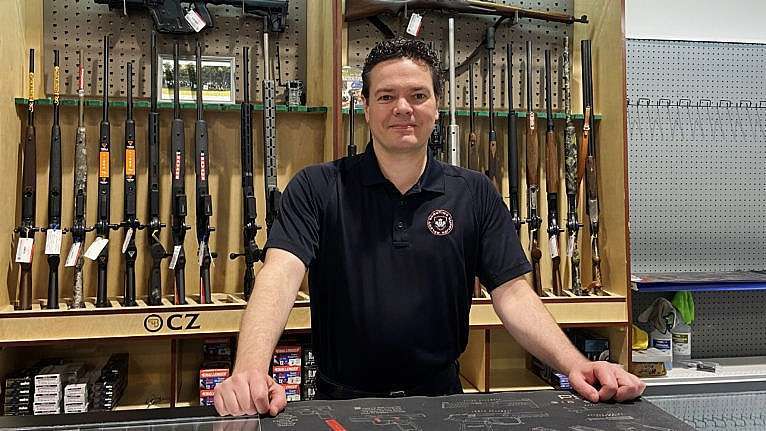 “Targeting and attacking businesses like ours, and our customers, is not going to do anything to lessen crime in our streets,” says gun store owner Ryan Simper

The federal government has tabled legislation that would end the purchase, sale, transfer and importation of handguns in Canada. Prime Minister Justin Trudeau has touted the move as “capping the market” in this country. Ryan Simper, who is in charge of business development for Select Shooting Supplies in Cambridge, Ontario, spoke to Maclean’s about the existing process for buying a handgun, what will change when this new law comes into effect and whether it will be effective in fixing the issues it purports to address.

When I transfer a firearm to somebody, I have two options that are acceptable: one is for the purpose of target shooting (which has to be done at a chief firearms officer–approved range) or for the purpose of collection. Those are the only two options. There is no option for protection of life. For the most part, the public doesn’t know what it takes to own a handgun in Canada. Canadians consume a lot of American media, so they just assume that it’s as easy to get a gun in Canada as it is in the U.S., and that’s not the case at all. We have a different culture, we have different rules.

It’s already an extensive process to purchase a handgun in Canada. First, you have to pass the Canadian Firearms Safety Course. That is 16 hours of instruction, followed by a written exam and a practical exam. After that is complete, you have to wait for your test results to come back from the chief firearms officer. In the meantime, you can download all the forms from the RCMP’s website or obtain them from Service Canada for your background check. You’re going to have to outline any partners that you’ve co-habitated with in the past five years, and your spouse’s information as well.

You’re going to have to answer questions asking if you’ve been prescribed any drugs for depression, or if you’ve had a job loss or a divorce in the past five years. You’re going to have to provide references that the RCMP should call. Your co-habiting partner or spouse is going to have to sign off on that last page to say, “Yes, I’m okay with this individual owning firearms.” And then you send that entire package off to the RCMP in Miramichi, New Brunswick, and if everything checks out on their end, then they will send you your firearms licence in the mail.

It was taking on average around seven to eight months to get a firearms licence recently. I can say that, after being a reference on dozens of licence applications, I have not been called once. So I think the RCMP really needs more resources.

When you go to a retailer who is is licensed to sell handguns, you bring your possession and acquisition licence that the RCMP sends you. When you’re purchasing a handgun, we have to transfer the handgun to the individual. It takes a little bit longer in Ontario than it does in other provinces; before all of this happened, the turnaround time was about six weeks.

Since the public safety minister made this announcement alongside the Prime Minister, we sold every single handgun that we had in stock. Firearm owners feel like they are some of the most responsible citizens in the country, because the RCMP has put their trust in them to give them the licence. So when somebody says you can’t have any more, they go out and buy. I think it’s more of a protest—they’re saying that the current government wants to eliminate handgun ownership in this country and the current government doesn’t trust its own citizens. So they’re gonna go and buy them.

If the new law goes through, we’ll no longer be able to sell handguns. It is a large part of our business and we’ll have to move into something else. I feel more sorry for the smaller shops that are probably going to go out of business, because they don’t have the ability to make a quick switch into something else. We run a range as well, Range 519, so that’s a revenue stream for us.

I believe there are parts of this bill that will work to target people who need to be targeted, and that’s the elements of organized crime that are bringing guns across the border. But targeting and attacking businesses like ours, and our customers, is not going to do anything to lessen crime in our streets. Our law enforcement customers are telling us that this won’t make their job any easier.

It’s just targeting the property that’s been lawfully acquired by citizens that has been cleared to own by the RCMP. If our national police service says it’s okay for me to own a gun, if the national police service says it’s okay for my customers to own a gun, why is the government against me owning a gun? There’s a severe disconnect there. We want safer communities, but I don’t think this is the way to do it.”

— As told to Shannon Proudfoot

Get the best of Maclean’s sent straight to your inbox. Sign up for news, commentary and analysis.

June – The University of Sydney