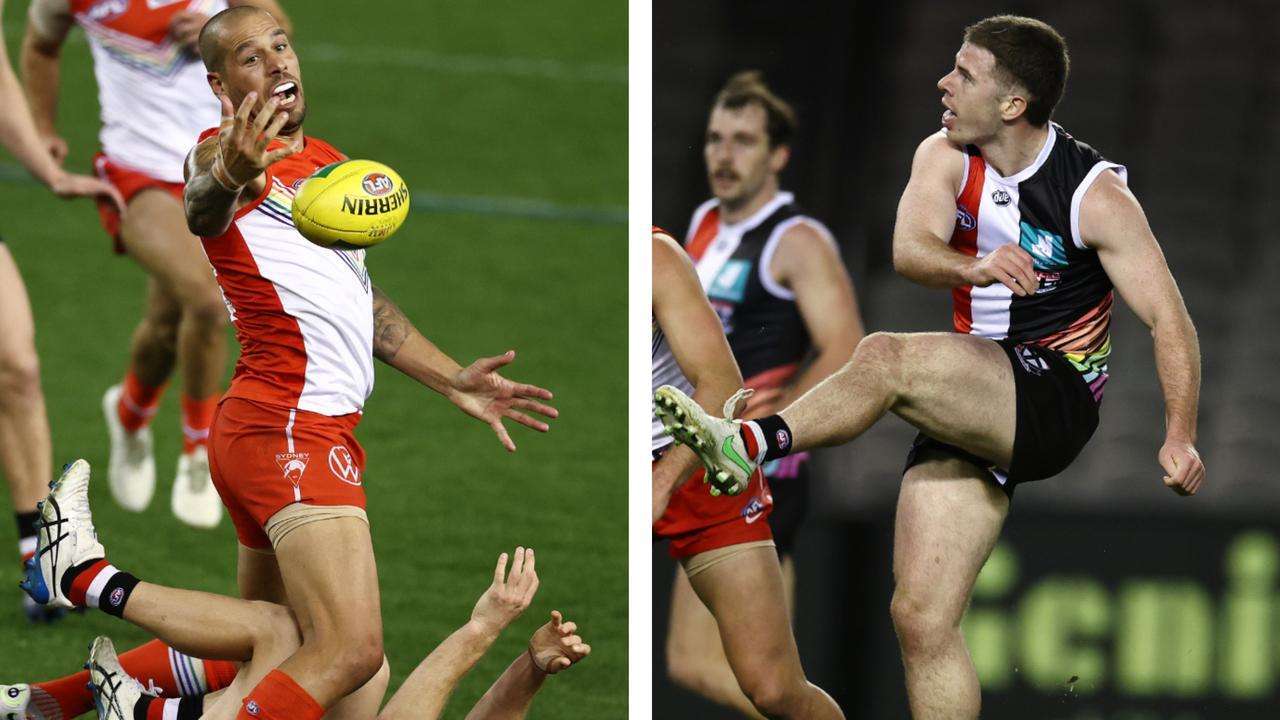 St Kilda have kept its slim finals hopes alive after defeating the Sydney Swans by 29 points in a major upset at Marvel Stadium on Saturday night.

Jack Higgins led the way for the Saints — booting an equal career-high four goals and making amends for his wayward 1.6 effort last time these teams met in Round 12.

It snapped a five-game winning streak for the Swans and deals a significant blow to their top four chances, especially given Port Adelaide won its Showdown clash against the Crows.

The Saints (9-11) climbed into 11th position on the ladder and half a game outside the top eight, while the Swans (13-7) sit fifth and could drop to sixth if the Lions beat Fremantle on Sunday.

The only sour note on the night for the Saints was a groin setback to rising star forward Max King, who was subbed out in the fourth quarter for Jack Bytel.

Callum Mills was a late, late out for Sydney with Achilles soreness, replaced by James Rowbottom. Jack Bytel (St Kilda) and Ryan Clarke (Sydney) were the medical subs.

Errol Gulden booted the first goal of the game after Tom Papley centered a kick from the pocket.

St Kilda’s Cooper Sharman was quick to respond at the other end of the ground with a brilliant goal from a tight angle to even the scoreboard, while Jack Higgins made it two in a row with a crafty snap around the body.

Matched up on Callum Wilkie, Buddy Franklin booted his first goal of the day from point-blank range after getting awarded a dubious free kick.

Max King kicked the next major after taking a big contested mark before giving it to his opponent Dane Rampe.

“That movement and aggression and strength that he showed there is the best that I’ve seen from him, the penny is dropping,” Hawks legend Jason Dunstall said on Fox Footy. ‘

Interestingly, the Swans had dominated clearances 7-0 in the first quarter but weren’t as effective as the Saints inside 50 — who kicked 5.0.

Tom Papley kicked an exhilarating snap goal in the final minute to cap off a nine-major blitz between both clubs.

St Kilda came out with great intent as they had in the first quarter with its pressure rating through the roof, while Jack Steele and Rowan Marshall were busy around the contest.

Jordan Dawson made good on a Rowan Marshall turnover by snapping through the big sticks, much to the dismay of coach Brett Ratten.

Steele kicked an important captain’s goal to push the Saints ahead on the scoreboard.

Higgins booted his third goal of the game with just over six minutes left in the second quarter to extend his side’s lead to a game-high 17 points.

Gulden struck first in the third quarter — his second goal for the day — to reduce the margin to 11 points.

“The Swans get the perfect start to the third term,” Montagna said.

But the Saints had all the answers, booting the next two goals through Kent and King — both of which kicked their second majors for the night.

King exited the game soon after to go down to the rooms with his groin issue to cause the only concern so far on the night for St Kilda.

Tim Membrey joined in the fun to kick his second goal of the game and open up a game-high 23-point lead for the Saints.

Jack Higgins then booted his fourth goal of the night — an equal career-high effort — to continue to pile on the pain to the Swans.

King returned in the fourth quarter for the Saints but looped proppy, with Dunstall saying: “(He) Really wasn’t moving well. Not sure how much impact he can have if any in this last quarter.”

He was subbed out of the game in the fourth quarter for Jack Bytel.

The Swans threatened to get back in the game late after back-to-back goals to Papley and Will Hayward.

But Sharman put the nail in the coffin for St Kilda at the other end of the ground with a running goal after a sensational second effort from Steele.

3. SAINT RESPONDS TO HORROR 1.6 EFFORT TO BE THE ‘DIFFERENCE’ IN REMATCH

Jack Higgins was coined ‘Missy Higgins’ after his performance against the Swans earlier in the season – converting just 1.6 of his opportunities in front of goal in a game where St Kilda went down by nine points.

But the Saints recruit entirely flipped the script in their rematch, kicking an equal-career high four goals in the first half to set up the sharpshooting Saint’ 18-point advantage.

St Kilda’s inaccuracy in front of goal had been an issue in recent weeks, converting 13.8, 8.13 and 12.9 in its last three outings.

But against Sydney they kicked 5.0 to open the match to to get their confidence up and finished with 14.9, led by Higgins.

The former Tiger’s kicking became infectious to the rest of the team, with Dean Kent (3.0), Tim Membrey (2.o) and even Cooper Sharman (2.1) also maximising their chances.

“It’s entirely plausible that if they had’ve kicked straighter the last few weeks, they would’ve gotten over the line,” Riewoldt told Fox Footy.

“The contrast coming into this game has been insane, with St Kilda able to come out and basically not miss in that first half. It just highlights the importance of being able to capitalise on your good work.”

“He’s been the difference at ground level. They’ve needed someone like this and he’s made the most of it. He sprayed them everywhere last time they met,” he said.

“What a difference it makes when you can kick straight.”

2. MARSHALLING THE TROOPS IN VETERAN’S ABSENCE

Just like he did last week, Rowan Marshall stepped up massively in the absence of Paddy Ryder (Achilles) with sole ruck duties.

The big man was particularly dominant in the first half, tallying 13 disposals, six clearances and 22 hitouts with six hitouts going to advantage.

He finished with a career-high 25 disposals, 18 contested possessions, eight clearances and 29 hitouts. And it’s fair to say he won the head-to-head against ex-Saint Tom Hickey, who had 14 possessions and 26 hitouts.

It helped set the tone for St Kilda and set them up to win several key statistics including contested possessions (+9) and inside 50s (+10).

“Marshall’s second quarter was amazing. 12 possessions in the second term there which is the most by a ruckman in a quarter,” he said.

“Pretty quiet in the first term both of them but Marshall got the ascendency and was able to win a lot of the footy at ground level as well to really get field position and the ball moving forward for the Saints.”

With Ryder likely to miss the remainder of the season, Marshall is set to have a key role to play on the run home in the Saints’ unlikely finals push.

Sydney’s fire power up forward has been such a major asset for them in recent weeks – booting scores of 98, 98 and 109 in the last three weeks as one of the highest scoring teams in the competition.

But their forwards failed to fire across the board against an undesized Saints defence missing Dougal Howard, James Frawley and Jake Carlisle, with Buddy Franklin (one goal) and Sam Reid (goalless) both well hold on the night.

Franklin, as always, was on 1000 goals watch with 985 majors to his name going into the match. And he seemingly had a major advantage going into the contest playing on the 191cm Wilkie.

“He’d be licking his chops tonight because you look at the St Kilda backline: Dougal Howard’s gone out, I thought Frawley might have been a chance to come in, he’s not. It’s really thin back there for the Saints,” Saints great Nick Riewoldt said pre-game.

But neither Buddy nor his teammates were able to capitalise on the Saints’ undermanned defence in an area of the ground they normally get such a strong output, with Wilkie deserving full credit for his shut down effort.

Riewoldt noted at half-time that Franklin was drawing all the attention, but his teammates weren’t able to take advantage of the situation.

“When you’re a superstar like he (Buddy) is it means you attract all the attention of the opposition defenders. You can see every time the Swans have the ball held up, everyone’s just gravitating towards Franklin,” he said.

Get all the latest AFL news, highlights and analysis delivered straight to your inbox with Fox Sports Sportmail. Sign up now!

Follow St Kilda v Sydney in our live blog below!