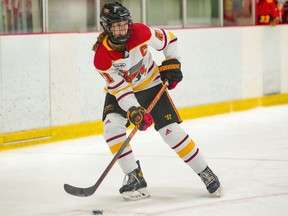 Years of hard work and practice on the ice are paying off for Exeter native Hannah Tait as she hits the road to compete in the 2023 FISU Winter World University Games in Lake Placid, NY.

The 21-year-old hockey forward and University of Guelph student will represent Canada during the games on the women’s hockey roster. The games will bring together more than 1,600 athletes from more than 50 countries from Jan. 11-22 to compete in sports including hockey, curling, alpine skiing, figure skating, snowboarding and more.

“It’s something you always dream of as a little hockey player,” said Tait of learning she was on the final Team Canada roster. “I didn’t want to believe it until those exact words were said. I’ve never felt like that before. I couldn’t believe it. It’s super exciting.”

Tait, who is in her fourth year as a Guelph Gryphon, serves as that team’s captain. Before becoming a Gryphon, she played for the London Devilettes and the South Huron Sabres. She first stepped onto the ice at the age of four, getting her start in ringette before jumping into hockey soon after.

Tait said she first learned that she was being considered for the Team Canada roster in September last year, but got the final word that she was heading to Lake Placid in November, even after she had suffered a shoulder injury.

“That was really scary,” she said.

The time leading up to the FISU games has been filled with lots of preparation for Tait as she ensures she is ready to hit the ice, working alongside her physiotherapist to strengthen her shoulder while working out, running and getting in ice time whenever she can. Tait said she’s also tried to keep focused on Gryphons games as she prepares.

“I’m just trying to do as much as I can for my team in Guelph and be prepared for that,” she said. “Unfortunately, I have to leave them for four games while I’ll be away, but it’s a once-in-a-lifetime experience, so obviously they understand.”

The Team Canada women’s hockey roster features five players from Ontario University Athletics (OUA), as well as Gryphons associate coach Katie Mora, who will be acting as Team Canada’s assistant coach and team lead through the games. Tait will also get an opportunity to play against fellow Gryphon forward Chihiro Suzuki, who is representing Japan.

“When we’re on the ice, we’re definitely not going to take it lightly,” she added.

As she prepares to make her way to Lake Placid, Tait said she’s most excited to get to know her Team Canada teammates and showcase the talent U SPORTS has to offer.

“Women’s hockey in Canada has come a long way,” she said. “I feel like sometimes people tend to think ‘they should play for the States,’ or that if someone doesn’t play for the States, then they must not be that good. I don’t think that’s the case at all. There’s a lot of talent here.”

Tait said she’s also looking forward to getting to watch other competitions such as snowboarding and skiing while she’s at FISU, and she’s excited that the games are close enough to home that her family can be in the stands cheering her on as she competes.

Team Canada’s first matchup will be against Slovakia on Jan. 11 at 8 p.m. The 2023 FISU Winter World University Games in Lake Placid can be watched online for free at www.fisu.tv.

Top 6 sports records that were...