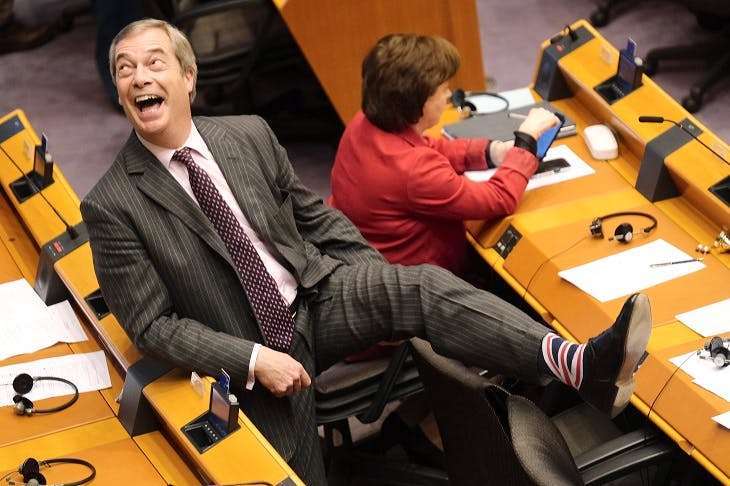 There’s something pitiful about the ‘great state of NSW’ knotting its knickers over a political figure that passes as a living version of cheerful Middle England.

‘If this happened in my country this would be a front-page story on every national newspaper…’ said Farage, after he wandered into the clutches of the Blue Mafia in NSW.

Nigel Farage is currently engaged in a sold-out speaking tour of Australia ahead of the CPAC conference this weekend.

He has held many roles during his career, including as a Member of the European Parliament and leader of UKIP. Farage is currently the Honorary President of Reform UK (previously the Brexit Party) and a GB News host where he stands accused of being a controversial figure, but only for those with a European Union tramp stamp or collection of Che Guevara t-shirts…

The Australian publications raging at his presence in the country love to call Farage a right-wing populist, which is code for ‘we’re really upset that leftism is on the decline so we wrote this hit piece to cheer our subscribers up’. They’ve never forgiven the bloke for BREXIT where he almost single-handedly cut the EU’s hefty shackles that had turned one of the greatest nations on Earth into a blood bank for parasitic eurocrats to feed off.

The media, public institutions, and the government at large have built their reputations on social justice politics – which means they’re in a bad mood after the Italian elections. Farage has arrived in the middle of this Woke backlash and has begun stamping on the ground around activist ant nests.

What they mean to say is that Penthouse Australia publisher, Damien Costas (who frequently prints articles from leading political figures), has brought some conservative entertainment Down Under.

Oh, how it must burn the Left that a raunchy publication is promoting conservative politics.

Mind you, the only thing more amusing than publications hissing about Farage is that the trusty university activist class has gone missing.

It’s school holidays, which means Arts students and Gender Studies majors are lining Queensland beaches like blue bottles strewn over the sand after a tidal surge – only this time it was a wave of beer and vegan-friendly chips that did them in.

All of this is terribly awkward for NSW Police who, having solved every crime in the state, have decided to engage in a bit of friendly ransom to pass the time.

Essentially, the police threatened to close down the private speaking event in Pyrmont unless thousands of dollars were handed over based on ‘science’ that I’m sure we’ll never see. The compulsory bill is for security that the event did not want or ask for ‘just in case’ protesters showed up.

Why not fine the protesters if they cause trouble, you ask? Probably because there’s nobody to fine.

‘As it was we didn’t get any protesters at all,’ said Farage.

‘There weren’t any difficulties. The fundamental point is that for a meeting where conservative views were expressed, a ransom had to be paid. I would argue that if I had been a representative of Black Lives Matter or the Climate Change movement, that wouldn’t have happened.’

He’s probably right. It’s hard to imagine NSW Police threatening one of the Left’s favourite political children considering they were allowed to engage in free range activism during the Covid lockdowns.

‘Goodness knows who runs the police here because the officers that turned up were utterly charming, very nice, and good at their job.

‘But think about this…

‘I came along to Australia as a visitor. This was a ticketed private venue. We had our own security – had there been a concern about violent protests we’d have known about it because there are always clues online about these things.

‘As it was, basically a ransom was demanded for this event to go ahead.

‘The NSW police asked for $3,000 Aussie dollars to be paid up otherwise they’d stop the event from taking place. The money was paid yesterday.

‘Even more extraordinarily, today at two o’clock another email came through to say if the contract wasn’t signed by four o’clock they’d stop the event going ahead.

‘I think free speech should be free…’

And while Nigel Farage and his organisers can afford to cough up the blood money, smaller conservative speakers certainly can’t.

The existence of these fines effectively ropes off political speech for those who can afford it – or anyone on the Left, who don’t have to worry. It’s the sort of behaviour you’d expect in a third-world nation with a jealous political hierarchy.

That said, someone might need to remind Farage that this is the country that told counter-terror units to patrol beaches with assault rifles to ‘keep us safe’ from a virus. Nothing says ‘flattening the curve’ like handcuffing surfers.

‘There was nothing seditious or bad or wrong going on in that room tonight – just an exercise of free speech and I don’t think any money should have been paid for it to go ahead … these were more like bureaucrats working within the police force.’

Perhaps Premier Dominic Perrottet – a conservative (on paper) – can explain why speakers on his side of politics are routinely harassed, fined, and deplatformed?

It’s very difficult to defend a Liberal Party that doesn’t like conservatives. In fact, why isn’t Perrottet front and centre, opening CPAC this weekend and thanking the organisers for bringing together so much conservative talent?

Instead, we’ve got a silent Premier locked in a cage every night by his Woke Deputy, Matt Green [sic] and a Federal Leader of the Opposition in Peter Dutton, who looks as though someone left him in screensaver mode after the election.

Do yourselves a favour, head over to CPAC on Saturday and watch Farage storm into the spotlight.

Got something to add? Join the discussion and comment below.