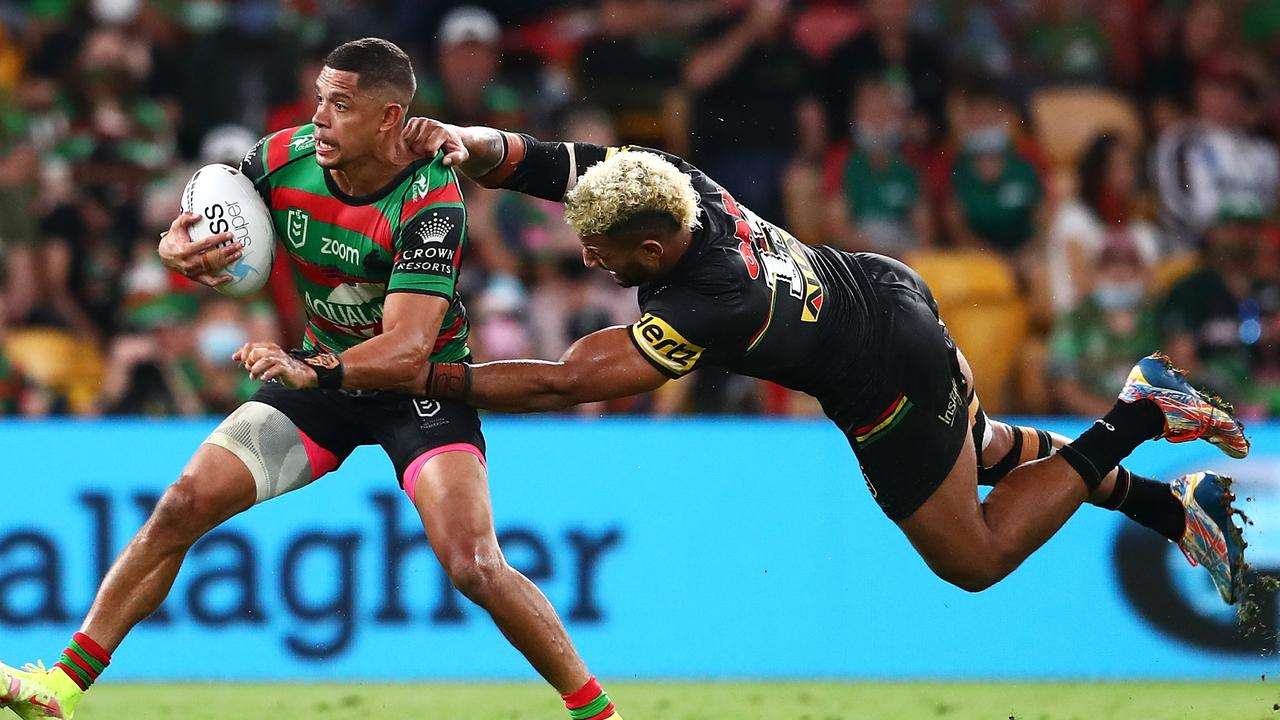 The young gun Panthers have lit up the competition in attack for two seasons, but it was their stoic brick wall of defence that helped them win their first premiership in 18 years.

Viliame Kikau was a colossus in defence making 32 tackles with just one miss and he chased down Jaxson Paulo in a never say die moment that summed up this Panthers team’s commitment this season.

Meanwhile the match winning try was scored from a heads up defensive play from Stephen Crichton against the run of play, which effectively clinched the title for the mountain men.

Watch Fox Leagues’s massive line-up of Grand Final week coverage on Kayo including live pre-game, half-time and post-game coverage with full analysis from the best team in the business. New to Kayo? Start your free trial >

The Panthers were let in the fewest regular season points (286) and conceded 16, 6, 6 and 12 in their four finals games on route to the title.

Cooper Cronk believes the combination of defence and Nathan Cleary’s kicking game got the job done in a 14-12 nailbiter in the grand final.

“You can solely put that down to the kicking game and the kick chase defence won Penrith that game,” Cronk said.

“There was four or five repeat sets form Nathan Cleary’s pinpoint kicking, but every time Taaffe, Johnson and Paulo touched the ball on tackles one and two they went backwards.

“That’s the reason how you keep Cody Walker out of the game because every time Cody Walker got over halfway he looked threatening.

“That was a hell of a contest. I am so glad I’m retired watching football this way now.”

‘STOP TRYING TO PUT ANY MORE TO IT’: Bennett fires up over Souths halves

Cronk paid tribute to Penrith’s defence for making up for their clunky attack at the back end of the year, which was also due to some pretty strong defence from their opposition.

“If anything ever meant defence wins championships well Penrith’s defence this year in holding Souths to 12 points,” Cronk said.

“But what they have done in the finals defensively against three quality teams was tremendous.

“They should absolutely deserve and enjoy this moment because the Cleary family, Isaah Yeo, the leadership at the Penrith Panthers.

“Enjoy it because it was one hell of a performance considering what happened last year.”

Panthers legend Greg Alexander paid tribute to the team’s defence in an emotional aftermath to the game, which saw the club clinch a premiership 30 years after their first.

“Somehow they dug deep through a finals series where they were beaten in week one,” Alexander said.

Viliame Kikau was a man on a mission.Source: Getty Images

“Was there two better games than the Parramatta and Melbourne games where there was only five tries scored across both games?

“Then to put in that performance. 8-6 up at halftime I thought if Souths get 50 per cent of possession they will win the game.

“But Nathan’s kicking game and their defence. Their desperation to just turn up in numbers just didn’t allow Souths to have the shots in numbers that they needed down the other end.”

Panthers coach Ivan Cleary echoed the sentiments of the experts in summing up what got his side home in an epic and brave finals campaign.

Get all the latest NRL news, highlights and analysis delivered straight to your inbox with Fox Sports Sportmail. Sign up now!!!

“I just can’t wrap the boys enough for the courage they have shown,” Cleary said.

“We really couldn’t train the last three weeks hardly as a team. So many guys not training but luckily the games were so hard each week that was enough training. We obviously had enough in the bank.

“To be able to scrape home again it is probably justified by how good we have been for two years and the amount of work everyone has put in.

“But I think it is purely on courage that these boys have won this.”

It was fitting that the match winning try was actually scored from a defensive play in Stephen Crichton’s intercept.

“I must say our edge guys have practised that situation I don’t know how many times,” Cleary said.

“Like every single week. Credit to Cameron Ciraldo who runs our defence.

“We train for it and you know what when it comes off in the big moments. Crichton has the ability to do that but he has trained for it.

“It was a beautiful moment when that happened. That was surreal that was just gold.”

Defence win premierships and no one was better on the other side of the ball than the 2021 premiers.