Sydney onslaught the most captivating watch of the year

BusinessSydney onslaught the most captivating watch of the year 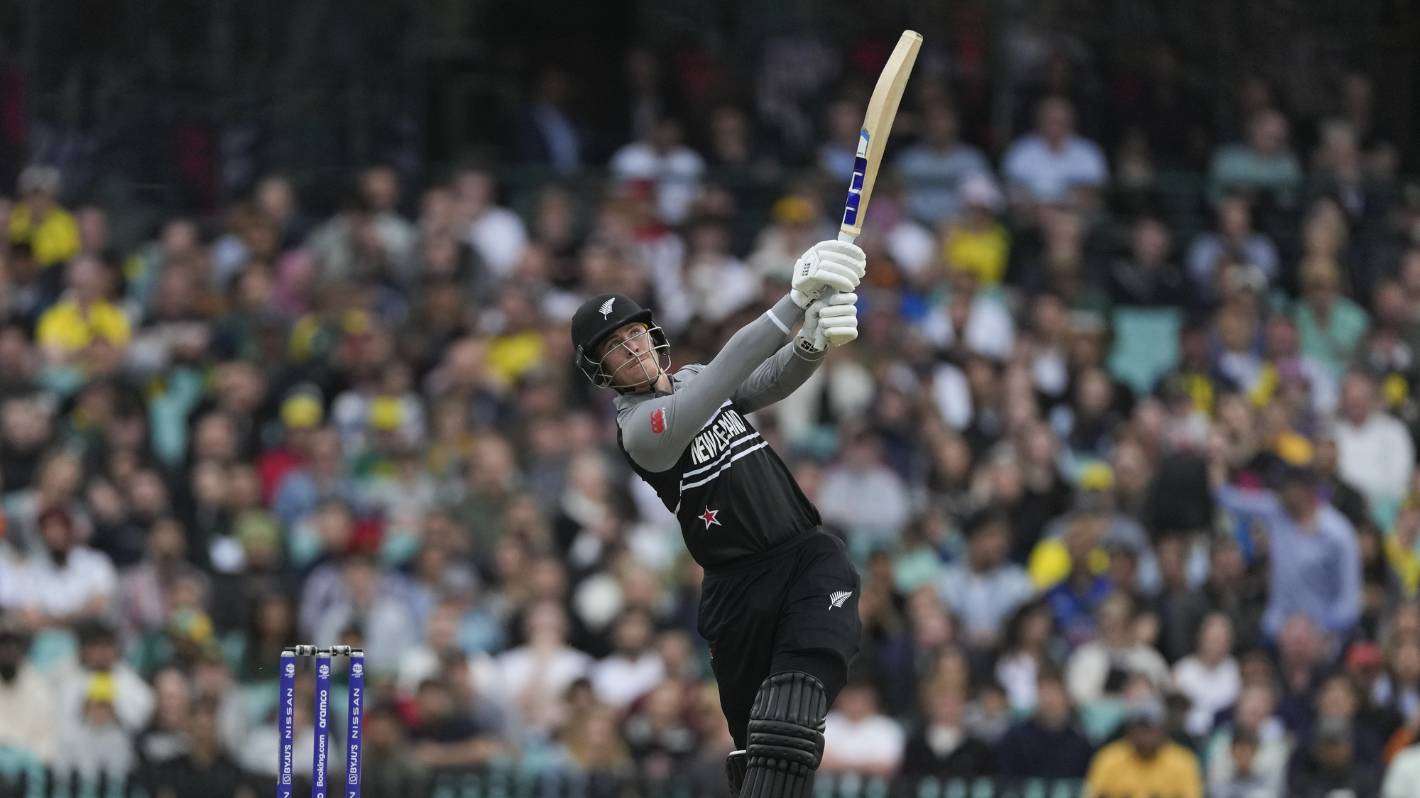 Black Caps opener Finn Allen got his side off to a flying start against Australia in Sydney on Saturday night.

Peter Lampp, a former sports editor and commentator based in Manawatū, writes a weekly column for Stuff.

OPINION: When the Black Caps got off to their blazing offensive against Australia in the World Cup opener at Sydney, there was much scratching of heads about this Finn Allen chap.

He could have been bred in Finland for all most fans knew.

No, he was Auckland born, was in the St Kentigern College 1st XI but had to leave for Wellington to get game time. Last summer he hit the most sixes in our Super Smash competition – 25.

Included in those was a half century off 17 balls against Central Districts, so we sort of get the idea.

His exploits haven’t been widely appreciated with domestic cricket coverage tucked away on Spark Sport. Allen though has already played in the Indian Premier League for Royal Challengers Bangalore and for Yorkshire in Twenty20.

Many of us missed his 42-run onslaught off 16 balls against Australia because it clashed with the last quarter of the NPC rugby final but had it recorded. Many others hadn’t twigged that the cricket was screening on Sky.

Spinners and power hitters ensure a comfortable victory for the hosts over Pakistan in Christchurch.

Allen’s McCullumesque magnificent assault on Cummins, Starc, Hazelwood and Stoinis could now mean that Martin Guptill may be surplus. It was also my absolute sports watch of the year.

Which made the rain-out on Wednesday so disappointing as we were poised to watch Allen dispatching the Afghans over the faraway fences at the real G in Melbourne.

While the Aussie players were a glum bunch at Sydney’s G while watching the pogrom from their benches, Mark Howard and their commentators lavished praise on our Caps. Suppose they had little option.

In times past when there were Australian umpires of the ilk of South African rugby referees, Glenn Phillips’ airborne catch in the deep would have been ruled not out just as Martin Snedden’s similar effort was in the 1981 underarm one-dayer.

Allen’s assault mirrored that of Lance Cairns in 1983 when his Excalibur swatted six sixes off Australia at the Melbourne Cricket Ground on the way to 52 off 25 balls. The difference, the Kiwis lost that one and Dennis Lillee had greeted Cairns by sconing him on the head.

On a good day

Wellington’s victory in the NPC rugby final was popular simply because teams from Canterbury (stockpiled with Crusaders) winning too often are deemed to be unhealthy for the game.

One Linda Wood summed it up on Facebook: ”You can’t beat Wellington on a good day.”

Wellington’s lineout and ferocity at the breakdowns led by the meteorite Du’Plessis Kirifi carried them to 10 straight wins.

A stone faced Dua’Plessis Kirifi with the trophy after winning the NPC final against Canterbury at Orangetheory Stadium in Christchurch.

Similar to him is Canterbury openside jackaller, Tom Christie, who also missed the northern tour. Both men smile only after games, once they have got the job done. It’s serious business after all and the NZ way.

Ruben Love of Manawatū heritage has found his feet at fullback, more assured by the game and also pencil in young second five-eighth Riley Higgins for future fame.

When Wellington previously won, in 2000, Dave Rennie was the coach. He had two more seasons with them before the clubs there got strangely restless and he was ousted. Ultimately that was to Manawatū’s benefit when he rescued the Turbos in 2006 and reignited his coaching career.

Prior to the NPC rugby final, many were putting it about how exciting it would be if the Canterbury province won all three finals, except that didn’t make sense.

In rugby terms, South Canterbury has been an autonomous province since 1888 as has Mid Canterbury since 1927. They are simply not affiliates of the Christchurch mob.

Tasman more closely fits that bill as the home of the Nelson-based Crusaders academy.

He had two brief flings for Manawatū out of Linton Army. Now he’s a major at Burnham Camp and has been picked for the NZ Heartland XV.

Mid Canterbury had flown by Air Chathams to Whakatane and then had a 3-hour plus bus trip to Ruatoria.