What’s happening in Canada and around the world on Monday Students in Alberta and British Columbia are returning to classrooms on Monday after an extended holiday break.

The question of when students should return to class, and under what conditions, has been a subject of debate across the country as provinces and territories shifted plans in the face of the fast-spreading Omicron variant.

Rapid tests and medical-grade masks will be distributed through Alberta schools, provincial officials have said, with all schools expected to have their initial shipment by the end of this week.

“Both rapid tests and masks will be shipped in phases,” read a statement issued by the province last week.

Edmonton Public Schools and the Alberta Teachers’ Association have expressed concern over the fact that the supplies won’t be on hand for everyone immediately, saying that could further exacerbate the lightning spread of Omicron cases.

In British Columbia, Education Minister Jennifer Whiteside has said safety measures will include virtual assemblies, visitor restrictions, staggered break times and access to three-layered masks as schools navigate this wave of COVID-19. School attendance will be monitored and an unusual dip will trigger a response from public health, which may include an investigation, the use of rapid tests or a temporary shift to how students learn, she said.

“To help with effective information-sharing, parents are encouraged to report rapid test results to public health and to ensure they contact the school if their child is staying home because of illness,” she said.

Teri Mooring, head of the BC Teachers’ Federation, has said she would like to see teachers prioritized for COVID-19 booster shots and N95 masks, which should be available for use in schools. Enhanced masking, using HEPA filters and ensuring teachers have their third shots will support schools in staying open, she said.

The province — which had allowed some children of essential workers and learners with some disabilities back into classrooms last week — has warned there may be functional closures due to staff illness and that COVID-19 exposure notices will no longer be sent unless there are significant dips in attendance.

WATCH | Ontario First Nation receives military help after half of community gets COVID:

The chief of Bearskin Lake First Nation in northern Ontario is calling for more support from the Canadian government amid a COVID-19 outbreak that has affected at least half of the residents. Four Canadian Rangers are working in the community, and four more have been promised. 1:59

With lab-based testing capacity deeply strained and increasingly restricted, experts say true case counts are likely far higher than reported. Hospitalization data at the regional level is also evolving, with several provinces saying they will report figures that separate the number of people in hospital because of COVID-19 from those in hospital for another medical issue who also test positive for COVID-19.

For more information on what is happening in your community — including details on outbreaks, testing capacity and local restrictions — click through to the regional coverage below.

You can also read more from the Public Health Agency of Canada, which provides a detailed look at every region — including seven-day average test positivity rates — in its daily epidemiological updates.

Ontario Health Minister Christine Elliott on Monday reported that 2,467 people were hospitalized with COVID-19, with 438 people in intensive care units. The health minister noted, however, that not all hospitals report over the weekend.

“An additional 680 cases are being reported today arising from these results,” said a statement released Monday.

There’s a 3:30 briefing today with just health minister John Haggie. This will be his first appearance since his he was diagnosed with COVID-19#covid19nfld

New Brunswick reported 220 new lab-confirmed cases, with the number of people hospitalized with COVID-19 rising to 86. As of Monday, all New Brunswickers 18 and older are now eligible to book an appointment for a booster, as long as five months have passed since their second dose.

Health officials in Nova Scotia had not yet provided updated COVID-19 data for the day.

In the Prairies, Manitoba on Monday reported a jump in the number of COVID-19 hospitalizations over the weekend, up to 378 from 297 reported on Friday. The number of ICU patients also rose and is now at 39.

In addition, the province reported 2,383 new lab-confirmed cases and 19 new deaths over the last three days. The five-day test positivity rate now stands at 49 per cent, according to provincial data.

The number of patients with COVID-19 in Saskatchewan hospitals rose to 119 on Sunday, with no additional deaths reported. The province, which as of Sunday was reporting 13 ICU cases, recorded 1,099 additional lab-confirmed cases.

Sask. changes how hospitalizations are reported amid patient surge

As COVID-19 hospitalizations soar, Saskatchewan has started to track, and report, patients that were admitted for virus-related illness and those admitted for other reasons separately. 2:01

What’s happening around the world 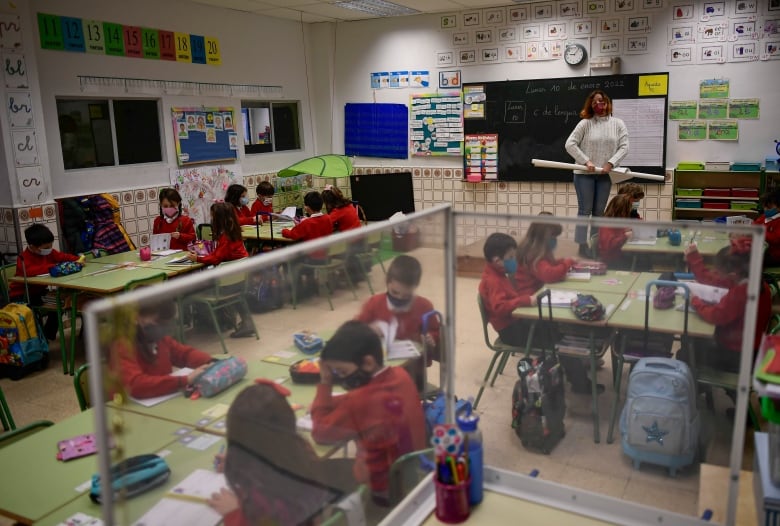 As of early Monday morning, roughly 307.2 million cases of COVID-19 had been reported worldwide, according to Johns Hopkin University’s case tracking tool. The reported global death toll stood at more than 5.4 million.

In Europe, Italy targeted the unvaccinated with a host of new coronavirus restrictions Monday, with proof of vaccination or recovery from a recent infection required to enter public transport, coffee shops, hotels, gyms and other everyday activities.

The new “super” health pass requirement, which eliminates the ability to show just a negative test to gain access to services, comes as many Italians return to work and school after the Christmas and New Year holidays. COVID-19 infections are soaring past 100,000 per day in Italy.

The government has responded to the Omicron-fuelled wave of infections by passing new restrictions aimed at encouraging vaccine holdouts to get the shots or be increasingly shut out of recreational and even essential activities, such as taking a bus or subway to work.

Italy, where the coronavirus outbreak first erupted in Europe in February 2020, has fully vaccinated more than 80 per cent of people over 18, according to the European Centre for Disease Prevention and Control. 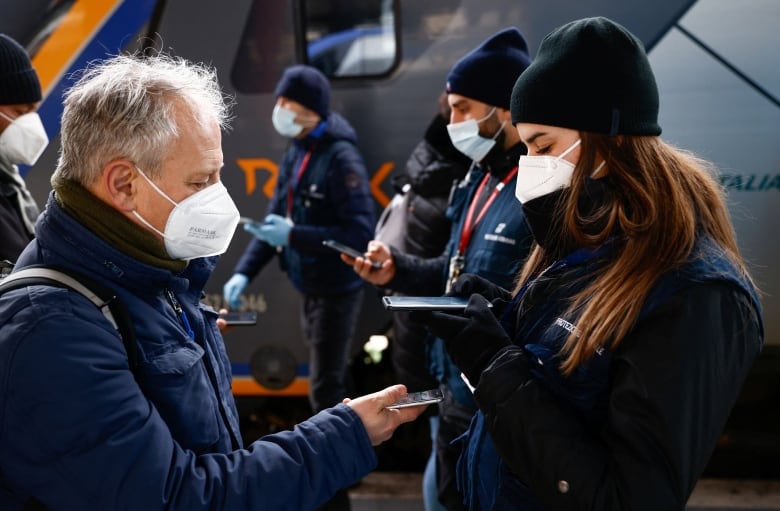 A man shows his ‘Super Green Pass’ before getting on a train at Termini main train station in Rome. Italy brought in tougher rules for the unvaccinated Monday. (Guglielmo Mangiapane/Reuters)

But two million people out of Italy’s population of 60 million are currently positive, impacting essential services. School districts have complained they don’t have enough teachers to reopen, since so many are positive or in quarantine. Some train service has been curtailed because of labour shortages.

Doctors’ associations, meanwhile, have said the surge is hitting Italy’s hospitals hard. Some 16,000 COVID-19 patients are in the hospital and 1,600 are in intensive care, but that is well short of the 4,000 people in intensive care units during the height of the first wave. Officials say around two-thirds of those now hospitalized are unvaccinated.

The Chinese city of Tianjin tightened exit controls and is requiring residents to obtain approval from employers or community authorities before leaving town to block the spread of Omicron.

In Africa, health officials in South Africa — one of the first countries to raise the alarm about the Omicron variant — on Sunday reported 82 deaths and 4,482 additional cases of COVID-19.

In the Americas, Mexico hit a record for daily infections over the weekend and its official death toll rose to 300,334 on Sunday, while Brazil’s climbed to 619,981.

Meanwhile, in the U.S., Chicago school leaders cancelled class a fourth day in the nation’s third-largest district as negotiations with the teachers’ union over remote learning and other COVID-19 safety protocols failed to produce an agreement over the weekend.

Mayor Lori Lightfoot and Chicago Public Schools CEO Pedro Martinez said in a joint statement Sunday evening that there wasn’t “sufficient progress” in talks to resume in-person classes Monday, extending disruptions into a second school week. But they vowed negotiations would continue “through the night.”

Disputed issues included testing and metrics to close schools. The Chicago Teachers Union wants the option to revert to districtwide remote instruction, and most members have refused to teach in-person until there’s an agreement or the latest COVID-19 spike subsides. But Chicago leaders reject districtwide remote learning, saying it’s detrimental to students and schools are safe. Instead, Chicago opted to cancel classes as a whole, two days after students returned from winter break.

In the Middle East, health officials in Iran on Monday reported 37 additional deaths and 1,932 new cases.

— From Reuters, The Associated Press and CBC News, last updated at 10:35 a.m. ET