Stormy winter weather in Manitoba has caused power outages for thousands of people throughout the province Thursday and prompted the closure of a section of the Trans-Canada Highway.

Just before 12:30 p.m., more than 10,000 Manitoba Hydro customers were without power due to 168 outages, according to the utility’s outage map. The outages are mainly concentrated in the Interlake region and Selkirk area.

Hydro spokesperson Bruce Owen said the wet, sticky snow that started falling Wednesday is weighing down power lines and causing some to snap.

Workers are trying to restore power as quickly as possible but the weather is making it challenging since travel conditions are dicey, he said.

Some customers in the Interlake and near Lac du Bonnet may not have power until Friday, he said.

Poor road conditions due to the snow also forced the closure of the Trans-Canada highway in Manitoba near the Ontario border, the province said just after noon. 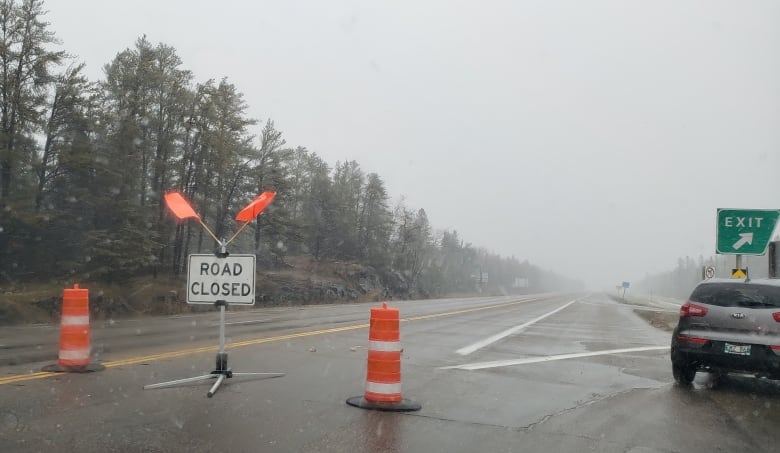 ‘Road closed’ signs were set up at the Falcon Lake turnoff on the Trans-Canada Highway in Manitoba Thursday. (Karelle Arbez/Radio-Canada)

In Manitoba, the highway is closed from Falcon Lake to the Ontario border.

Ontario officials closed the Trans-Canada from the Ontario border to Shabaqua, northwest of Thunder Bay.

Heavy snow is expected to continue for most of the southern half of Manitoba Thursday, with much of the region under Environment Canada snowfall and winter storm warnings.

The Parkland region is still under a winter storm warning, with up to 25 centimetres expected by the end of the day.

Some areas with higher elevation closer to the Saskatchewan border may see up to 40 centimetres, the weather agency says.

Areas under a winter storm warning include:

Snowfall warnings also remain in effect for many communities in southern Manitoba, including Winnipeg, Brandon and the Interlake region.

The snow continues today as winds get very strong late afternoon and evening. Gusts to 70 or 80 km/h this evening especially near the lakes. Blowing snow likely #DriveSafe #cbcmb #mbstorm pic.twitter.com/iXDzhz9iXP

Environment Canada issued snowfall warnings for parts of the province from the Interlake down to Sprague and the Northwest Angle Wednesday afternoon, but expanded them again early Thursday morning.

In addition to Winnipeg and Brandon, snowfall warnings now apply to these areas:

Winnipeg will likely see between 15 to 25 centimetres of snow by this evening, while communities in the Interlake and Red River Valley could see more than 30 centimetres due to lake effect streamers off of Lake Manitoba. 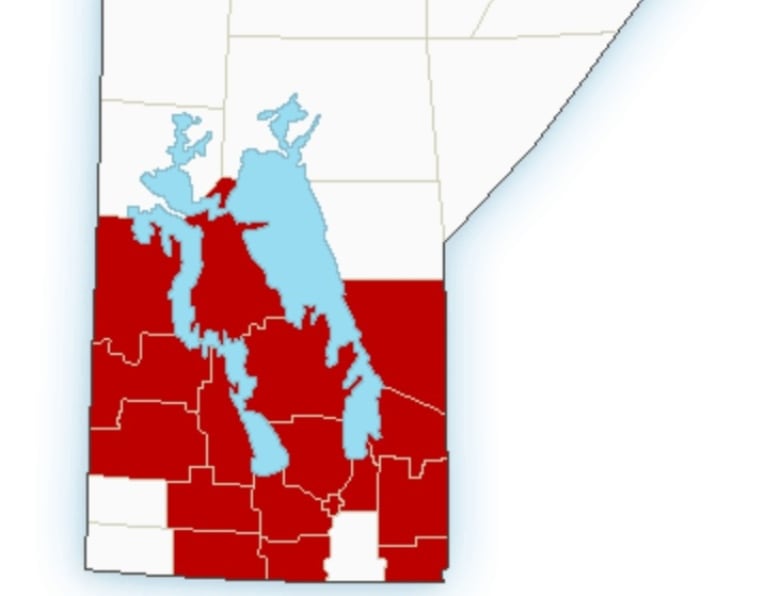 Snowfall and winter storm warnings are still in effect for much of southern and central Manitoba. (Environment Canada)

Thursday is also expected to be a windy day, with gusts of up to 80 km/h, which could cause poor visibility in some areas.

High winds may affect areas along the south basin of Lake Manitoba, as well as shorelines near Gimli on the west of Lake Winnipeg and Victoria Beach on the east side, Manitoba’s Hydrologic Forecast Centre says.

That may cause waves that raise water levels by as much as 1.5 metres (five feet) or more between mid-Thursday and late evening Friday, the province said in a news release.

This stormy weather is expected to ease up by Friday morning.